Astronomers explore the universe by detecting the electromagnetic radiation and cosmic rays emitted by celestial objects. Different objects emit their radiation at different wavelengths spanning from very short wavelength gamma rays, to X-rays, ultraviolet, visible light, infrared and long wavelength radio waves. The Earth’s atmosphere shields us from much of this radiation, so modern astronomy is done from large optical and infrared telescopes on high mountains. Radio telescopes must be situated in remote, “radio quiet” areas, far from man-made radio interference. Certain wavelengths are totally blocked by the Earth’s atmosphere and can only be studied from space using orbiting satellite observatories.

South African astronomers are fortunate to have access to some of the largest facilities for astronomy in the world. The Southern African Large Telescope(SALT) at Sutherland in the Northern Cape is the largest single optical telescope in the southern hemisphere, while in neighbouring Namibia the High Energy Stereoscopic System (HESS), an array of four gamma-ray telescopes is the largest such facility in the world. South Africa is building the Karoo Array Telescope (KAT), a radio telescope that will form the core or a much larger radio telescope facility called MeerKAT. The latter project is in support of South Africa’s bid to host the Square Kilometre Array (SKA), an international project to create a receiving surface of a million square metres, one hundred times larger than the biggest receiving surface now in existence. South Africa would be an ideal location for the SKA owing to its geographical location, large expanses of radioquiet land and its record of accomplishment to build, host and support such large-scale facilities.

Southern African Large Telescope (SALT) SALT is located at Sutherland in the Northern Cape Province. This large optical telescope was built by South Africa and partners in Germany, Poland, New Zealand, the United Kingdom and the United States. SALT has an effective mirror diameter of 10 metres, making it the current largest single optical telescope in the southern hemisphere. This telescope gives South Africa and its international partners an extremely powerful tool to study the southern sky. SALT is able to record light from distant stars, galaxies and quasars a billion times too faint to be seen with the unaided eye – as faint as a candle flame at the distance of the Moon.

South Africa has started construction of a radio telescope called the Karoo Array Telescope (KAT). The prototype 15-m diameter dish for this array was completed in late 2007 at the Hartebeesthoek Radio Astronomy Observatory. The KAT array comprises seven 12-m diameter dishes located near Carnarvon in the Northern Cape. The site of KAT has been declared an Astronomy Advantage Area in terms of the Astronomy Geographic Advantage Bill. KAT is just the first phase of a much more ambitious project to build an extended radio telescope array of some 50 or more dishes, called MeerKAT. When it is commissioned in 2012, MeerKAT will be one of the world’s premier mid-frequency radio astronomy facilities and will put South Africa at the cutting edge of radio astronomy. 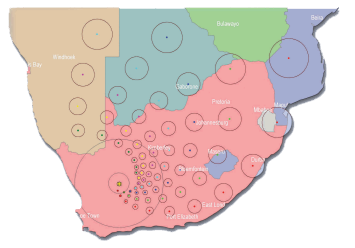 South Africa has been short-listed to host the SKA, a 1.6 billion Euro international project to create an array of antennas for detecting radio waves that will cover an area of one square kilometre (about the size of 150 soccer fields). This area is 100 times larger than the biggest receiving surface that now exists. The result will be an instrument capable of probing the secrets of the very early universe. If South Africa wins this bid, the main part of the SKA will be built in the Northern Cape, with other parts distributed across Africa. The MeerKAT will comprise the central core of the SKA telescope, if South Africa wins the SKA bid.