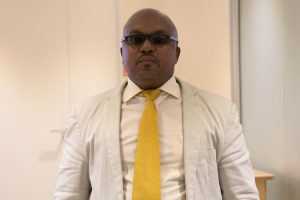 is the Deputy Director: Space Affairs and the Secretariat for SACSA. He holds a BSc degree from UNITRA in 1995 and the BSc(Hons) degree in Space Physics from the PU for CHE (now North West University).
He joined the dti as Deputy Director for the Non-Proliferation Council’s support; handling compliance and international liaison in the Missile Technology Control Regime (MTCR). Also, the compilation, and editing of missile technology, nuclear, chemical and biological related regulations and notices were his duties.
His current duties at SACSA Secretariat are to coordinate all administration functions of the Unit; co-ordinate partnership and networking within the dti and other government departments; conduct Space affairs research and analysis; and participate in developing and reviewing of Space Affairs policies and strategy. Mr. Njovane is also working on the new draft Space Legislation.